A common assumption in weak lensing studies has been that galaxy shapes are on average uncorrelated. However, during the formation and evolution of galaxies, anisotropic stress exerted by the large-scale structure on galaxies can affect their shape. This process results in a coherent alignment of galaxy shapes with the large-scale tidal field, known as intrinsic alignment. Therefore, accurate inferences of its amplitude are of paramount importance, in order to avoid biasing cosmological conclusions drawn from weak lensing analyses. Due to the mechanism by which the effect arises, inferring the intrinsic alignment amplitude can constrain the response of galaxy shapes to external structures, in the context of galaxy formation. Further, it serves as a late-time cosmological probe, since galaxy shapes ultimately correlate with the large-scale dark matter density field. In particular for elliptical galaxies, the correlation between galaxy shapes and the large-scale tidal field can be modeled as a linear function. In our latest publication,1 we constrain the linear alignment model using galaxy shapes from the LOWZ galaxy sample and tidal fields constrained with the LOWZ and CMASS samples of the SDSS-III BOSS survey.2

As galaxy shapes are affected by collapsing structures, which carry information on the initial conditions of the Universe, the intrinsic alignment signal is expected to be scale-independent and persist up to linear scales. For this reason, we probe the intrinsic alignment amplitude as a function of scale. To this end, we filter the original tidal fields with a top-hat filter in Fourier space. As a result, at any given scale, we remove contributions from smaller scales to avoid contamination from unmodeled processes, due to the resolution limit of the tidal fields. In the figure below, we present our results on the linear alignment amplitude, \(A_I\), as a function of scale \(R\). The yellow window indicates scales smaller than the original resolution of the tidal fields.

Brighter galaxies have been found to align stronger, whereas an evolution of the intrinsic alignment amplitude with redshift, may point to different galaxy formation scenarios. At the same time, potential evolution with galaxy color is important to analyses considering a wide color range. As a result, we split our galaxy sample into luminosity, redshift and color bins to study how the linear alignment amplitude scales with these properties. In the figure below, the three subplots from top to bottom show the evolution with luminosity, redshift and color, respectively. 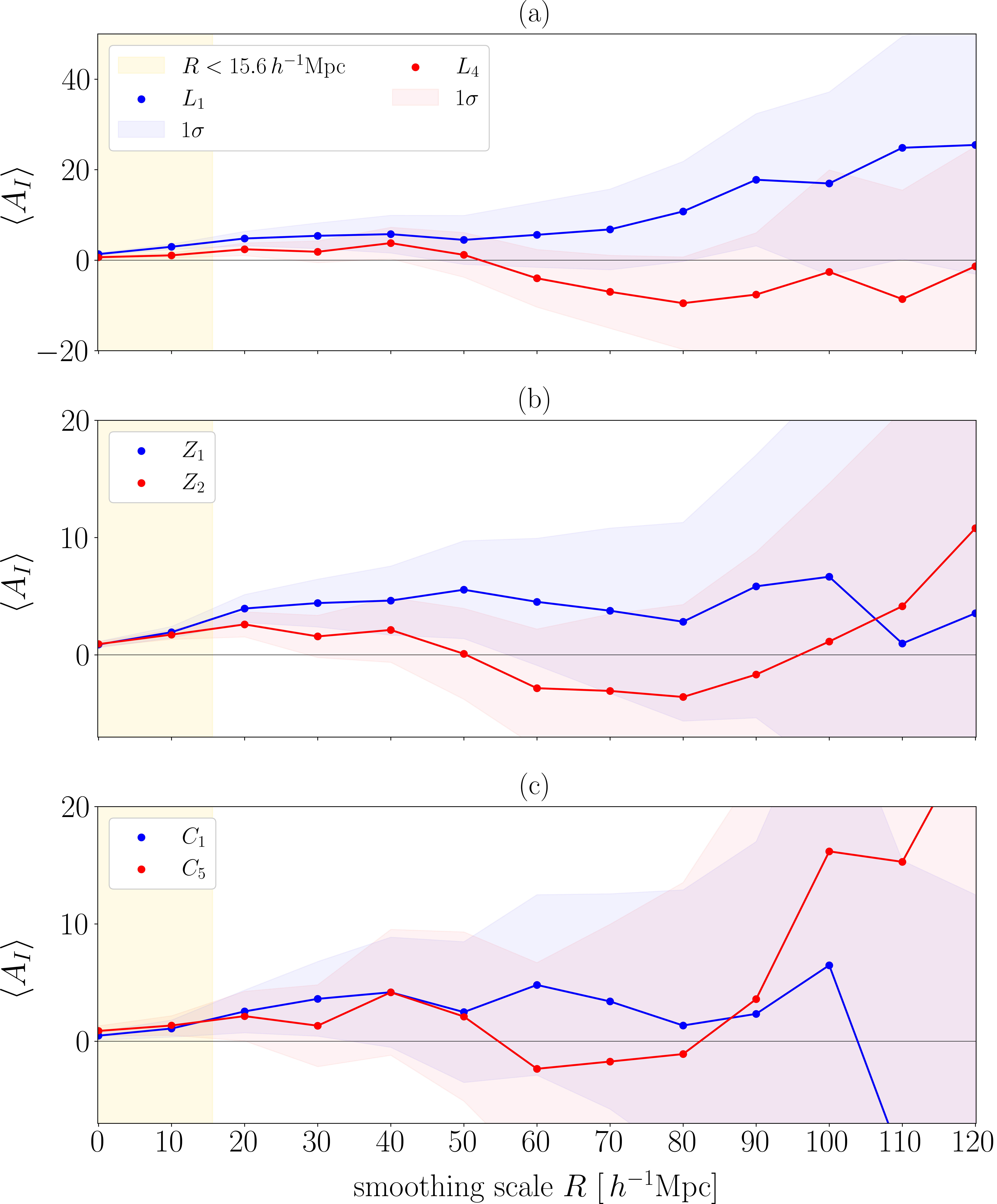 We observe no significant correlation between luminosity and the linear alignment amplitude. Given the short redshift and color range of our galaxy sample, we further observe no correlation with the corresponding properties.

Field-level approaches like the one we present here will allow the improvement on modeling both effects, on the basis of the data likelihood and the physics model. Ultimately, this work is a first step toward joint field-level inferences of intrinsic alignment and weak lensing,3 particularly at high redshifts.